I watched “The Women Who Kill Lions” on Netflix for inspiration for a new play. As a vegetarian it surprised me that I wasn’t horrified at what these women did. Instead it made me think deeply about how we size up our lives in relation to other’s; how each of us define ourselves in the choices that work best for us.

As a passionate vegetarian, I do not enjoy the thought of killing an animal for sport, or for meat, or clothes. I don’t feel like I have a right ingrained into me, by virtue of being on ‘top of the food chain’, and also defy any hierarchies that exist to engender any type of injustice.

However, whilst I watched this documentary I was struck by the humanity of the women that were being filmed. One was a gorgeous blonde woman, and the mother of two kids, and the other a beautiful single woman with a famous-in-their-neighbourhood pitbull. For them, hunting was part of what their parents had taught them, and thus their culture. Culture is a defining feature for a lot of us in how we live our lives.

Who’s worse, the hunters or those that gorge McDonalds?

We kill for food. As a country and as a society we kill, torture, abuse and force feed animals for food very day. This includes:

These animals are lost in the statistics. In the household of one of the mother of the two huntresses, I noticed that the blonde mother encouraged her kids to kill their own meat and spoke in a way that created an atmosphere of respect around the dinner table for the animals they were eating: Their plates were not filled with the product of a distracted walk to Aldi followed by a fumbling at the counter for a crumpled £5 note; they worked hard and gave the animal the respect it ultimately deserved.

It may sound controversial, but these women spoke of the meat on their plates as they really were: Animals. The animals which died for their meat were not lost amongst the supermarket rhetoric of “choice cuisine” and “hamburgers”, rather they spoke with a glimmer of reverence in their eyes for the beast they slayed, and showed more respect for the Animal Kingdom in that one meal than the entire UK does when they pay £2 for a burger at McDonalds without any thought of the panicked, eye-bulging chicken that was hung upside down in a slaughter house for them.

What was truly interesting for me to learn, is that alot of the game reserves in Africa will designate the animal the hunter can shoot, because they fit a certain criteria. That criteria is that perhaps the animal has been shut out the group because a new male is in charge, or perhaps it is a female that can not bear any more children. For me this is essentialising and I do not think animals should need to fit into a man-made criteria, made by men playing God to be able to live. However the meat is then donated to a nearby village to eat, and I can only assume it provides meals for a long time amount of time.

My goal here is not to condone hunting, but to expose everyday hypocrisy. I do not expect the world to go vegetarian, nor should they. Life and death exist together, and killing for food is an acknowledged method for survival. I am vegetarian because of my own beliefs, and if I lived any other way I would be doing a disservice to myself- if I convinced someone else to go Vegetarian, I would only be happy if that was something that was a truth for them, just as it was for me. The world is such a huge place that it is ridiculous to think we are all going to have the same values and beliefs, and yet because of social media and the internet we all get angry when people don’t. 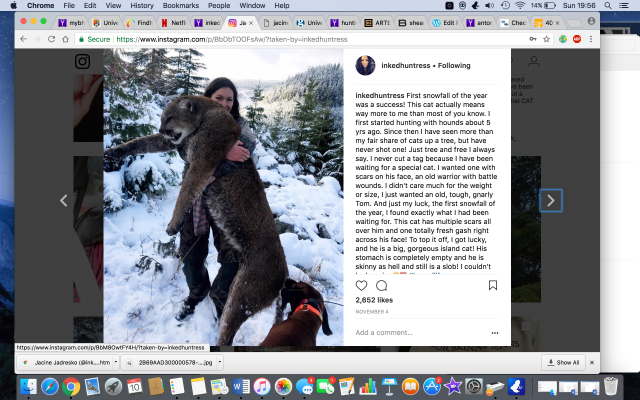 Because all of us spend so much time on the internet, we are trying to be one, big society now in cyberspace. We will see a picture of a woman smiling next to a Lion they have just killed, and start sending death threats and slating her and her children and calling her by slurs instead of her name, but before the internet you would probably never have met this woman, because she is from a different culture where, if you had visited, you would have been the odd one out.

It’s a difficult pill to swallow, but our beliefs are only better for ourselves, not for others.

I have a new respect for hunters, especially women hunters as they get double the abuse from old men who don’t think it is their place, and from men who think they are ‘trying to be men’. Please watch the documentary on Netflix and see what opinion you form. 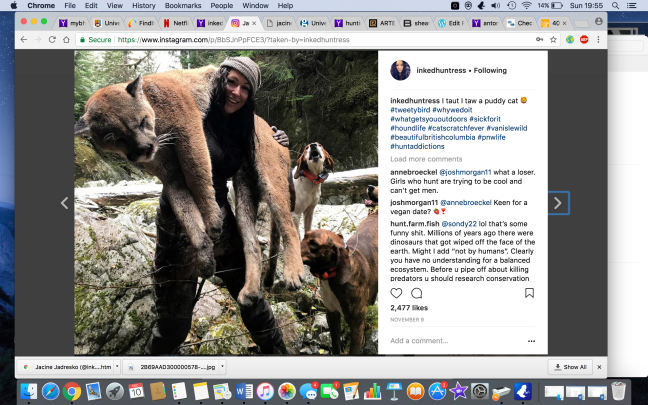 These women got an incredible amount of death threats and hate thrown at them from the internet, and it got so bad at one point that the woman with kids that the camera crew were following had to ask the team to stop filming her due to her deterioration in mental health. There seems to be an incredible amount of hypocrisy going on in this world, and I hope this post finds anyone who feels they have a past-time, a belief, a hobby or a faith which people are hurling slurs at them for because trust me: These slur hurlers will have just as many vices as the rest of us, and will be the sort of people who alienate people from their lives because of their inability to regard other’s feelings as important as their own.

My page is called “too busy to write” because we all think we are. Where you’ve been and who you’ve met may be nothing but something to fall asleep on now, but in 40 odd years they will be the stuff you try and remember. View more posts