Born and bred at the Pets at Home shop in the far away land of Selly Oak, located in the small retail park known as Battery retail Park, there was heard a distinct rustling beneath the cotton and odour control bedding; two baby rats, who would come to be known affectionately as MC Grindah and Prince Phillip, were taking their first baby breaths of the Selly Oak air.

I knew I wanted to name my boys after the two traits I looked for in a guy (at the time- my tastes have matured since then): Their ‘roadness’ and their ‘gentlemenliness’.

I thought road guys were fit, in particular MC Grindah, and I thought Prince Phillip was the hottest prince that Disney had to offer. The little men in my life saw to both needs, as furry and unintelligible in the English language as they are.

Into the house and into our hearts

Having made my room in 2nd year as messy and eclectic in shit as possible, the obvious addition was to be two little fun loving rodents, known to my closest as tiny harbingers of the Black Death.

These two little boys summoned love however, when you were around them, and regular lickings instead of death, destruction and disease. They smashed all sterotypes and proved all haters wrong.

Shannon, my old housemate was the first true advocate of the pair, and she jumped up and down in pure ecstacy after I blithely suggested making the number of mammals that took up residency in our house an even four. 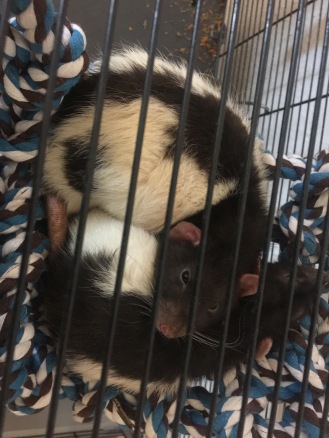 They started out small, and became large- like most good dreams.

They became synonymous with hope, in an era defined by the strife of many oppressed minority groups. I too would start the plight for rats, and campaign tirelessly by thrusting them forcefully at the world, and show them off as the clean and intelligent pets they were; not to be feared, but rather loved.

As tiny as they were, their first and only house was an £80 mansion, (no Jacqueline Wilson sob story for them) that could have fit 4 rats or 2 ferrets. Party on Wayne.

I knew one day I might breed them, (that option is now gone seeing as I let slip my desire at Pets at Home, and was swiftly told that the idea was awful and I might as well euthanise all the other baby rats in care already.)

I knew that their lives had to be fun, spacious and ‘free range’. Sewers no more; my rats had a hammock, a water feeder, and a wooden house. The Uprising had begun.

They’ve been to one party over their lifetime, (so far) and I told them, albeit misleadingly, that they could potentially meet their lovers.  Excited, MC Grindah put on his roadest outfit, and Prince Phillip picked out his sharpest suit; Prince Phillip wanted to bring his sword but I told him to leave it.

Although my mates didn’t really give them the warmest reception, bar Will, there were a few pingers about who gave them so much love that it made up for half the house being freaked out by ‘their tail’. It did get a bit late though and we crossed back about half an hour after we came, jarring MC Grindah who was about to be handed the mike.

Obviously we had many photoshoots over the years, and included here a few- note my fabulous new hair; we can all be models is my motto.

An MC and a Gentlemen were raised in my room.

They were raised with love,

They were raised without the bat,

They defied all expectations and refused to believe what the world told them they were- they defined themselves on their own terms. 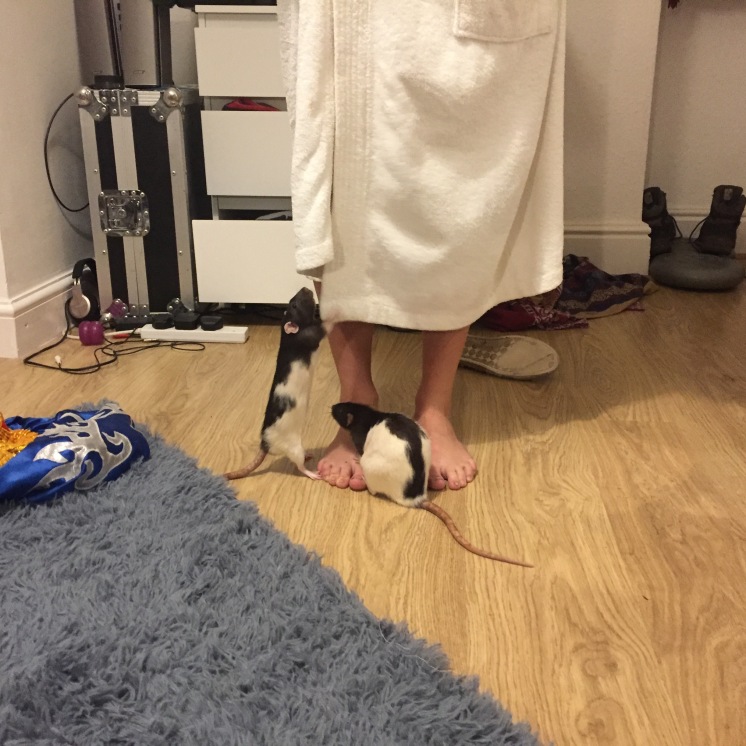 My page is called “too busy to write” because we all think we are. Where you’ve been and who you’ve met may be nothing but something to fall asleep on now, but in 40 odd years they will be the stuff you try and remember. View more posts